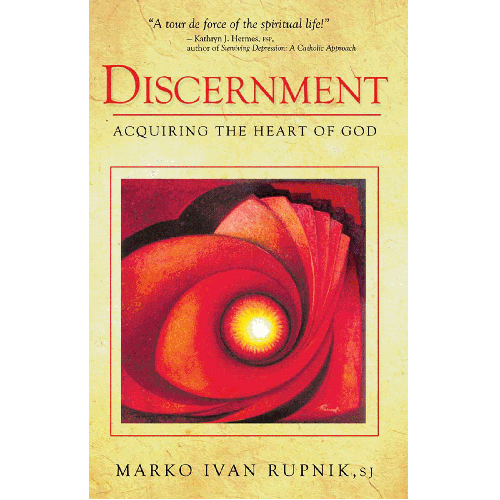 Rupnik Marko Ivan
Be the first to review this product
$16.95
Item Code
135479
EAN/UPC
9780819818829
Publisher
PBMJP
So much about our contemporary living can distract and disorient us, making it difficult to grow in the spiritual life, or even to cling to one's beliefs and practices with an inner conviction that fills the heart.

Enter the true art of discernment: more than simply a tool for making decisions or a method for mastering God's will, discernment is a process by which we learn how to remain in Christ, taking on his stance toward life, allowing him to inspire and direct our everyday choices. Precisely because it is an art of communication between persons, discernment cannot be reduced to a psychological technique for running our spiritual lives; rather, it is rooted in relationship.

Jesuit priest Marko Ivan Rupnik blends the wisdom of ancient Church fathers collected in the volumes of the Philokalia with the keen insights of Renaissance giant Ignatius of Loyola, liberally sprinkled with present-day examples. The result is a book of spirituality both eminently practical and lyrically enticing.

Add to Wish List
Read a Sample
About this item
Format:
Paperback
Pages:
248
Dimensions(Inches):
5.20 x 7.80
About the author
Marko Ivan Rupnik, SJ, teaches Eastern Christian spirituality at the Pontifical Oriental Institute and the theology of evangelization at the Pontifical Gregorian University. He directs Ezio Aleti, a center that studies faith and culture, and holds an art degree from Rome's Academy of Fine Arts.
Endorsements
"Some discernment guidebooks are chock-full of checklists and rules, leaving the scrupulous tied up in knots and the indifferent, well, indifferent.

"In contrast, Acquiring the Heart of God eschews step-by-step spirituality. Father Mark Rupnik, a Jesuit priest and fine art painter, regards discernment as essentially a personal dialogue with a revealed and living mystery, the triune God of love.

"The bulk of the book is really a preface to discernment, diagnosing the pitfalls and temptations of what are classically called the purgative and illuminative stages of spiritual development. In light of the individualism and relativism rampant in contemporary culture, this patient approach makes sense. God's will is bound to be difficult to discern until we learn to stop seeking our own will and start following the paschal way of Christ.

"Father Rupnik explains discernment in the Ignatian tradition, but he emphasizes developing a relationship with God over specific techniques. Discernment: Acquiring the Heart of God is virtually an anti-guide book, for its thesis is that, in the end, discernment is an art."
-wvano (Philadelphia, PA), Amazon.com customer review