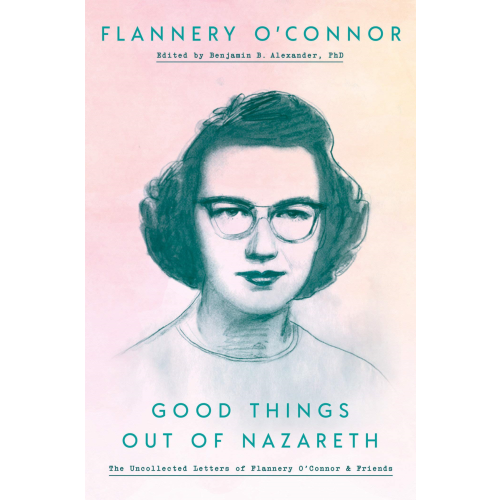 Good Things Out Of Nazareth Uncollected Letters Of Flannery

OConnor Flannery
Be the first to review this product
$26.00
Item Code
192809
EAN/UPC
9780525575061
Publisher
Random Bantam Doubleday Dell
A literary treasure of over one hundred unpublished letters from National Book Award-winning author Flannery O'Connor and her circle of extraordinary friends.

Flannery O’Connor is a master of twentieth-century American fiction, joining, since her untimely death in 1964, the likes of Hawthorne, Hemingway, and Faulkner. Those familiar with her work know that her powerful ethical vision was rooted in a quiet, devout faith and informed all she wrote and did.

Good Things Out of Nazareth, a much-anticipated collection of many of O’Connor’s previously unpublished letters—along with those of literary luminaries such as Walker Percy (The Moviegoer), Caroline Gordon (None Shall Look Back), Katherine Anne Porter (Ship of Fools), Robert Giroux and movie critic Stanley Kauffmann. The letters explore such themes as creativity, faith, suffering, and writing. Brought together, they form a riveting literary portrait of these friends, artists, and thinkers. Here we find their joys and loves, as well as their trials and tribulations as they struggle with doubt and illness while championing their beliefs and often confronting racism in American society during the civil rights era.
Add to Wish List
About this item
Format:
Hardcover
Pages:
416
Dimensions(Inches):
6.50 x 9.40
About the author
Flannery O’Connor was born in Savannah, Georgia, in 1925. She lived most of her life on a farm in Milledgeville, Georgia, where she raised peacocks and wrote. She was the author of two novels (Wise Blood and The Violent Bear It Away), thirty-one short stories, and numerous essays and reviews. She died at the age of thirty-nine. Her complete short stories, published posthumously in 1971, received the National Book Award for fiction.

Benjamin B. Alexander, PhD, a dynamic classroom teacher with over forty years of experience, has lectured widely on American, medieval, and African-American literature, as well as political theory and public policy. Dr. Alexander is currently crafting a critical study of Pulitzer Prize-winning playwright August Wilson and Shakespeare, as well as reviewing the unpublished essays of Walker Percy and Ralph Ellison for possible publication.
Reviews
Write Your Own Review