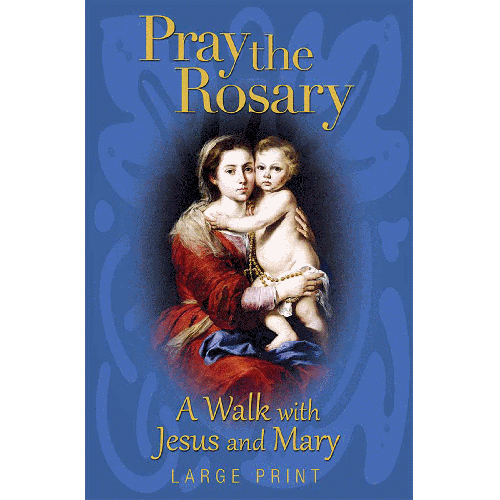 Dateno & Trouve
Rating:
100%
1  Review
$3.95
Item Code
173868
EAN/UPC
9780819860422
Publisher
PBMJP
A contemporary introduction to the Rosary Written by Marian experts who are dedicated to explaining the faith, this guide goes further than many others in explaining the "why" of the basics of praying the Rosary. It's a contemporary introduction to the Rosary that is excellent for beginners and those returning to the Church alike.

Maria Grace Dateno, FSP, and Marianne Lorraine Trouvé, FSP reflect on the meaning of the words of the Rosary, provide a meditation on the mysteries, discuss the fruits of the mysteries, suggest some intercessory prayer, and even give readers a diagram for praying the Rosary with them.

If you're looking for a way to keep the Rosary prayers with you all the time in a small volume that will fit into your purse or pocket, then this booklet is sure to please. Available in both regular-size and large print.

Add to Wish List
Read a Sample
About this item
Format:
Paperback
Pages:
64
Dimensions(Inches):
5.25 x 8.00
About the author
Sr. Maria Grace Dateno is a Daughter of St. Paul, and is currently an acquisitions editor at Pauline Books & Media, working with adult titles in the areas of faith formation, theology of the body, spirituality, personal growth, and lives of saints. She is also part of the acquisitions team for children's titles.

Originally from northern Virginia, Sr. Maria Grace has five siblings and and 24 nieces and nephews, who inspire her writing. She is the author of the six-book Gospel Time Trekkers series, which are time-travel adventures for ages six to nine. She also writes catechetical books for children, including The Mass Explained for Kids (co-author) and I Pray the Stations of the Cross.

Since 1976, Sr. Marianne Lorraine Trouvé, FSP, has been a member of the Daughters of St. Paul, an international congregation of women religious. She has an M.A. in theology from the University of Dayton, with a specialization in Marian studies. Since 1994 she has served on the editorial staff of Pauline Books & Media publishing house in Boston, Massachusetts, and has written several books, including Angels: Help from on High, and Mary: Help in Hard Times.

Reviews 1
Write Your Own Review