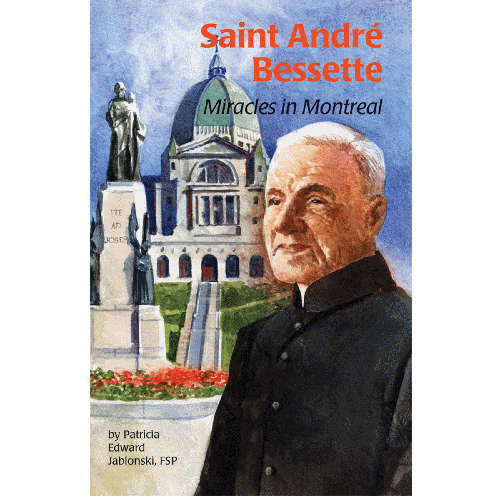 Alfred Bessette was born on August 9, 1845. At his birth he was so weak that his parents baptized him immediately. His father died when he was nine and his mother three years later. At that point the family was dispersed and Alfred began thirteen years of wandering from job to job with few belongings and very little reaming; he was barely able to write his name or read his prayer book. Eventually he became a brother of the Congregation of Holy Cross in Montreal. He was made porter at Notre Dame College and was known to say: "When I entered the community, my superiors showed me the door, and I remained there 40 years without leaving." He also washed floors and windows, cleaned lamps, brought in firewood, and worked as messenger.

It was Brother Andre's great love for and trust in St. Joseph, however, that would make him famous. Brother Andre started to welcome the sick and broken-hearted. He invited them to pray to St. Joseph to obtain favors. Before long, many people reported their prayers were being answered. For 25 years, in his small office or in the tramway station across the street from the college, Brother Andre spent six to eight hours a day receiving visitors. He built a chapel with the help of friends and eventually saw the construction of the St. Joseph Basilica at Mount Royal. He died Jan. 6, 1937, at the age of 92, and newspapers reported that more than a million people attended his wake and burial.

Brother Andre helps us discover the power of miracles in our life through his great devotion to St. Joseph. The life of this new saint also convinces young readers to never give up on the dream God has for them. No matter what happened, he kept praying and working for what God wanted. Saint André Bessette was canonized by Pope Benedict XVI in October 2010.