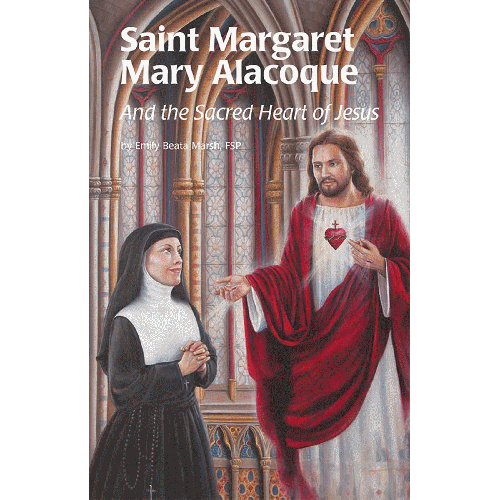 Discover the life of Saint Margaret Mary Alacoque, who spread devotion to the Sacred Heart of Jesus throughout the world!

Margaret Mary Alacoque knew in her heart that she wanted to serve Jesus, but little did she know that Jesus had a special message for her about his Sacred Heart.

As a child, Margaret experienced a miraculous healing after praying to the Blessed Mother, but she had to struggle to convince her own mother to allow her leave home and become a religious sister. Later, as Sister Margaret Mary of the Order of the Visitation, she struggled once again to convince those around her that Jesus was sending her messages to begin a devotion to his Sacred Heart. Jesus revealed twelve promises to Saint Margaret Mary when he spoke to her.

This 37th volume in the Encounter the Saints series familiarizes children ages 8 to 10 with Saint Margaret Mary Alacoque, who received the message of devotion to the Sacred Heart of Jesus and helped to spread it throughout the world!

Add to Wish List
Read a Sample
About this item
Format:
Paperback
Pages:
144
Dimensions(Inches):
4.50 x 7.00
About the author
Emily Beata Marsh, FSP grew up in Bemus Point, New York, and is the oldest of twelve children. She enjoyed reading, soccer, playing the piano, and working in her father’s grocery store. She met the Daughters of St. Paul when she was sixteen years old, and felt God calling her to love him with her whole life and to help other people know God’s love. Sister Emily Beata has worked in the children’s editorial department at Pauline Books & Media (the publishing house operated by the Daughters of St. Paul), and in outreach and evangelization. She currently serves in Alexandria, Virginia, and is pursuing her degree in theology at The Catholic University of America.
Available Digital Formats
Reviews
Write Your Own Review