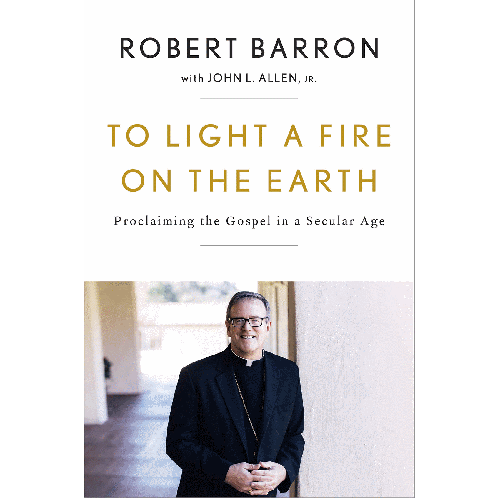 To Light Fire on Earth Proclaiminggospel In Secular Age

In this compelling new book—drawn from conversations with and narrated by award-winning Vatican journalist John L. Allen, Jr.—Barron, founder of Word on Fire Catholic Ministries, proclaims in vivid language the goodness and truth of the Catholic tradition. Through Barron’s smart, practical, artistic, and theological observations as well as personal anecdotes—from engaging atheists on YouTube to discussing his days as a young diehard baseball fan from Chicago—To Light a Fire on the Earth covers prodigious ground.

Touching on everything from Jesus to prayer, science, movies, atheism, the spiritual life, the fate of Church in modern times, beauty, art, and social media, Barron reveals why the Church matters today and how Catholics can intelligently engage a skeptical world.
Add to Wish List
About this item
Format:
Hardcover
Pages:
288
Dimensions(Inches):
5.20 x 8.00
About the author
Bishop Robert Barron is the founder of Word on Fire Catholic Ministries and Auxiliary Bishop of the Archdiocese of Los Angeles. He is also the host of CATHOLICISM, a groundbreaking, award-winning documentary about the Catholic Faith, which aired on PBS.

Bishop Barron has published numerous books, essays, and articles on theology and the spiritual life. He is a religion correspondent for NBC and has also appeared on FOX News, CNN, and EWTN.

Bishop Barron's website reaches millions of people each year, and he is one of the most-followed Catholics on social media. His regular YouTube videos have been viewed over 20 million times and he has over 1.4 million followers on Facebook.

John L. Allen, Jr., is the editor of Crux, specializing in coverage of the Vatican and the Catholic Church and the author of a number of books on religion, including most recently The Global War on Christians.
Reviews
Write Your Own Review