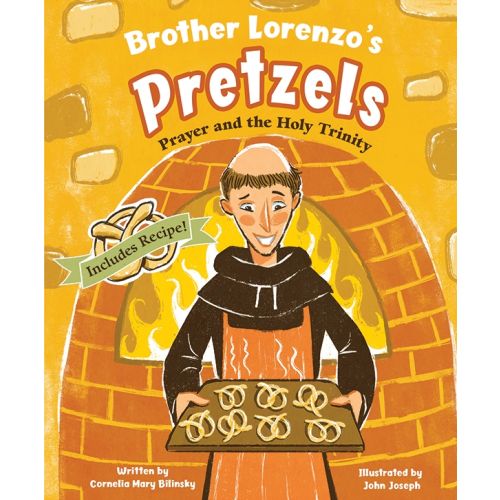 
Explaining the concept of the Holy Trinity to children can be difficult! In this story, a humble monk finds a simple way to do it: he bakes a pretzel that interweaves three parts into one whole. The story is both fun to read and theologically sound.

Now Cornelia Bilinsky, author of Patrick and the Fire, The Queen and the Cross, and The Saint who Fought the Dragon: The Story of St. George brings a new story to children ages four to seven: the story of Brother Lorenzo and how he happened upon a simple teaching tool in his monastery kitchen.

This beautifully illustrated book will help pass on an important aspect of faith to children through an entertaining story that offers readers likeable and relatable characters. In addition, Brother Lorenzo's Pretzels includes a prayer to the Trinity and even offers a recipe for making similar soft pretzels!

Add to Wish List
Read a Sample
About this item
Format:
Paperback
Pages:
40
Dimensions(Inches):
6.25 x 7.50
About the author

Cornelia Mary Bilinsky was born and raised in Manitoba, Canada. She received her Bachelor of Arts degree in English and Theology from St. Paul's College at the University of Manitoba. She taught English at the high-school level, as well as English as a second language at a community college. Cornelia's husband is a Ukrainian Catholic priest. They currently reside in Oshawa, Ontario, and have one daughter and one granddaughter. Since 1981, Cornelia has worked alongside her husband at Ukrainian Catholic parishes in Ontario. She enjoys teaching children about the faith with stories, plays, and songs. Cornelia is the author of several Pauline Kids titles: Santa's Secret Story (2011), The Saint Who Fought the Dragon (2011), The Queen and the Cross (2013), God Is with Me (2014), and Patrick and the Fire (2017).

John Joseph's love of art began at an early age while living in Orlando, Florida. As a young boy, he often visited the local animation studios and his experiences there helped him decide to become an artist. These days, he works as a book illustrator and an elementary school teacher. He is proud to call Denver, Colorado his home, where he lives with his family and their dog, Wendy.