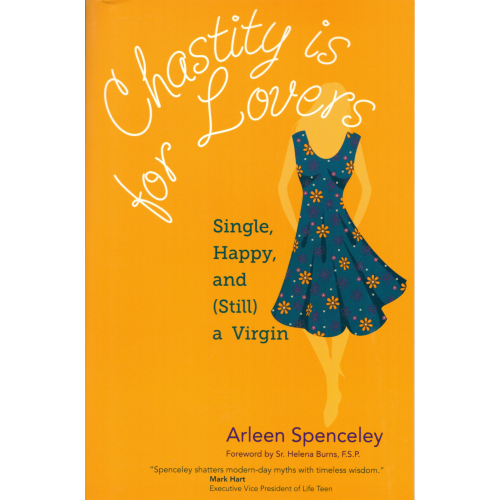 Chastity Is For Lovers Single Happy & Still A Virgin

Spenceley Arleen
Be the first to review this product
$13.95
Item Code
168301
EAN/UPC
9781594714801
Publisher
Ave Maria Press
In her debut book, seasoned journalist and self-professed "happy virgin" Arleen Spenceley offers a mature, funny, and relatable vision of Catholic teaching on chastity for young adults. Chastity Is for Lovers provides perspective on a variety of topics--the difference between chastity and abstinence, how virginity is an affirming and valuable life choice, how the word "purity" can be harmful in ministry settings, how to date well, and why sexual self-control is the best form of marriage preparation--and gives single adults the best possible chance to find true love. She carefully avoids using language that shames readers and instead presents a view of chastity that is joyful and positive.

Add to Wish List
About this item
Format:
Paperback
Pages:
137
Dimensions(Inches):
5.50 x 8.50
About the author
Arleen Spenceley graduated from the University of South Florida in 2007 with a bachelor of arts degree in journalism, and in 2013 with a master of arts degree in rehabilitation and mental health counseling from the same university. She first wrote professionally in high school, as a correspondent for the Tampa Bay Times, and joined the Times as a staff writer during college. Her work has also appeared in the Chicago Sun-Times, the Austin-American Statesman, the Journal Gazette, and the Herald Times in Indiana; the Norristown Times Herald, the Star-Courier, the Hometown Punxsutawney Magazine, and the Dispatch in Pennsylvania; the Record Courier in Ohio; the Houma Today and the Daily Comet in Louisiana; and the State in South Carolina. She has written on a freelance basis since college, including contributions to Chastity Project and a monthly column on Ignitum Today, and has contributed popular essays to Relevantmagazine.com, including "Is There Room for Erotica in Christianity?" and "Confessions of a Catholic Christian." She has also written for Busted Halo, Relate Magazine, and Lifeteen.
Reviews
Write Your Own Review