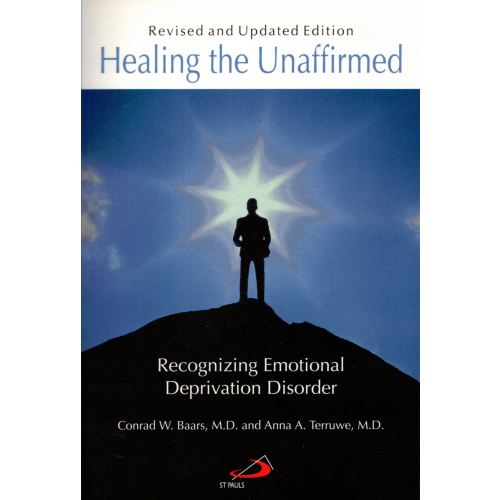 Baars & Terruwe
Be the first to review this product
$13.95
Item Code
101014
EAN/UPC
9780818909184
Publisher
Alba House
Why do so many patients fail to respond to psychiatric therapy? Be¬cause not all disorders are caused by the repression of emotions. The authors have shown convincingly that a specific syndrome de¬velops when a person has been deprived of affirming love. Analytic or solely cognitive or behavioral therapies do not bring lasting healing, or are of no avail in these unaffirmed persons, since they have never repressed their feel¬ings. Anti-depressants, shock therapy, or other therapeutic interventions of¬ten only worsen their suffering. What the unaffirmed person needs is affir¬mation therapy, which entails far more than simply giving “T.L.C.” Rather, this therapy involves the healing of the whole person—body, mind and spirit. The discovery of this well-defined syndrome of emotional deprivation dis¬order is most important. In our permissive, rarely repressing society, the num¬ber of patients who respond well to classical psychoanalysis is steadily de¬clining. The number of unaffirmed persons, however, is increasing at an alarming rate. Unaffirmed parents rear unaffirmed children, causing symp¬toms such as depression, anxiety, feelings of uncertainty, inferiority, and worthlessness—bringing some even to the point of suicide. Others “fight back” through their futile efforts at self-affirmation. Recognizing emotional deprivation disorder is the first step in correcting, through affirmation, many grave individual and global ills. Authentic affirmation brings about peace, self-confidence and joy.
Add to Wish List
About this item
Format:
Paperback
Pages:
221
Dimensions(Inches):
5.50 x 8.00
About the author

Anna A. Terruwe, MD, PhD, is retired and lives in the Netherlands. She earned her MD at the University of Utrecht and her PhD at the University of Leiden. Known as the discov¬erer of new syndromes dealing with the energy and frustration neuroses, she treated pa¬tients from all over Western Europe. Pope Paul VI called her work “a special gift to the Church.” Dr. Terruwe is the author of many books, a number of which have been trans¬lated into German, French and English. Some of the best known are Emotional Growth in Marriage and The Neurosis in the Light of Rational Psychology.

Conrad W. Baars, MD was a native of the Netherlands but practiced psychiatry in the United States from 1946 until his death in 1981. Educated at Oxford University and the University of Amsterdam Medical School, Dr. Baars served in the anti-Nazi underground in Belgium, France, and Holland during World War II. Captured by the Nazis, he spent two years in Buchenwald Concentration Camp. During the Korean War he served in the American Army as a medical officer. He discovered Dr. Terruwe’s work in the mid-fifties and developed and promoted it throughout his psychiatric career. He lectured widely and authored many articles and books including Born Only Once, Feeling & Healing Your Emotions, The Psy¬chology of Obedience, and The Unquiet Heart (Alba House, 1991). His extraordinary life story is recorded in his autobiography, Doctor of the Heart (Alba House, 1996). Dr. Baars and Dr. Terruwe are also the authors of Psychic Wholeness and Healing (Alba House, 1981).