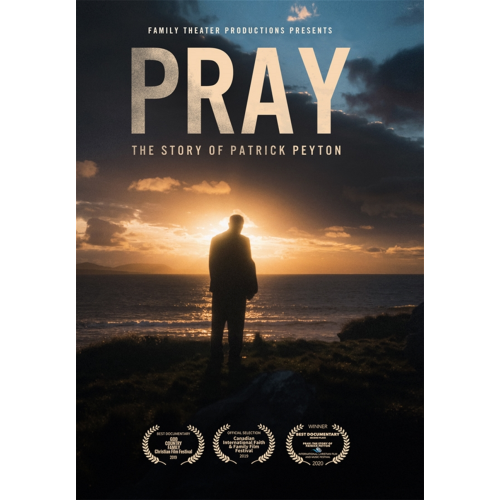 Pray The Story Of Patrick Peyton

This beautifully filmed, deeply inspiring documentary chronicles the life of a poor, uneducated Irish immigrant who journeys to America in 1928 hoping to become a millionaire. Instead, he is miraculously healed of tuberculosis through the intercession of Our Lady, becomes a Holy Cross priest and spends his life inspiring millions to experience the power of prayer, especially the family Rosary. We see Father Peyton’s amazing years in Hollywood, where he enlists numerous iconic stars of his day — Bing Crosby, Maureen O’Hara, Jimmy Stewart, Grace Kelly, and many more — to create radio dramas and TV specials that spread his famous message, “The family that prays together stays together.”

Then Father Peyton takes to the globe, gathering millions at massive Rosary rallies worldwide, to hear his moving message of family unity through prayer. Filmed on location from Hollywood to Ireland, this is the incredible story of a tireless missionary and modern Marian apostle, an unlikely hero, and one of history’s greatest advocates for family prayer and the power of the Rosary. Father Peyton died in 1992 and was declared "Venerable" by the Church in 2017 as his cause for canonization continues in Rome.

With your DVD order of "PRAY" you will receive a FREE copy of the new comic book about the life and legacy of Father Peyton  - THE TALE OF PATRICK PEYTON. While quantities last!

Add to Wish List
About this item
Format:
DVD
Dimensions(Inches):
7.00 x 10.00
Reviews
Write Your Own Review