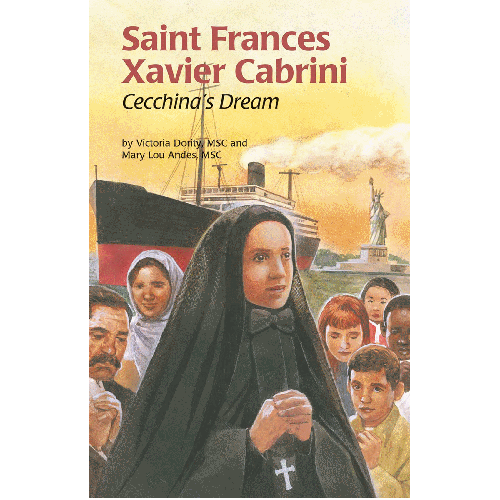 Andres & Dority
Be the first to review this product
$8.95
Item Code
116119
EAN/UPC
9780819870926
Publisher
PBMJP
Here’s the inspiring story of Mother Cabrini, the first American citizen to be declared a saint. As a child growing up in Italy, she dreamed of one day becoming a missionary. But how—and where—God’s plan for her finally came about was a surprise, even to her! Written with authority by two sisters of the Order Mother Cabrini founded, the Missionary Sisters of the Sacred Heart, this exciting book will introduce children to one of our most beloved American saints.

Frances was born on July 15, 1850. As a child growing up in Italy, she dreamed about being a missionary to China. When she grew up, Frances tried to join two different convents. Because of her poor health, she was not accepted. The Bishop asked Frances to begin a community of sisters dedicated to teaching. Without hesitating, Frances started at once. Before long, the Congregation of the Missionary Sisters of the Sacred Heart began to grow, first in Italy and then in many other countries. Frances, whom everyone called Mother Cabrini, had always had her heart set on going to China, but it seemed that God wanted her to go to America instead. When Pope Leo XIII told her, "Go West, not East," the matter was settled. St. Frances Xavier Cabrini sailed for the United States and became an American citizen. She especially helped large numbers of Italian immigrants. Though Mother Cabrini and her sisters had a very hard time in the beginning, schools, hospitals, and homes for children were opened up in different states. As the years passed, Mother Cabrini made many trips to spread her congregation and its works. There were always difficulties, but she put all her trust in the Sacred Heart of Jesus. "It is he who is doing everything, not us," she would say. Mother Cabrini died in Chicago on December 22, 1917. She was proclaimed a saint by Pope Pius XII on July 7, 1946. Children who read the life of Saint Frances Cabrini will discover the value of following their dreams. Though difficulties present themselves, following the dream God has for them will make them happy in the end and their life will have real meaning.