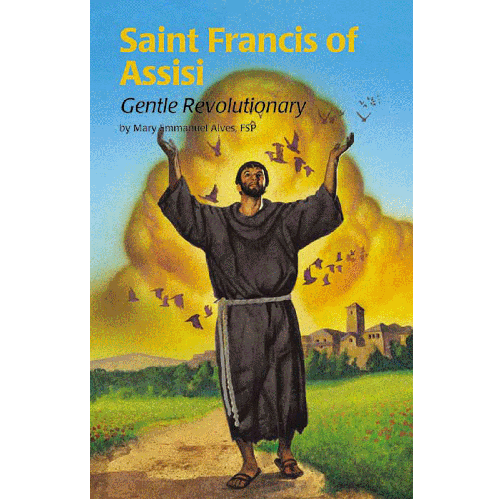 Francis was born in Assisi, Italy, in 1181 or 1182. The son of a wealthy cloth merchant, he dressed himself in the finest clothes and spent money freely. Seeking adventure and glory, Francis went to war in 1201. He was taken prisoner and became seriously ill. He was freed after a year and returned home. When he recovered from his sickness, he tried again to go into battle, hoping to become a knight. But on the way he heard the Lord telling him to go back to his home in Assisi, where he would learn what he was to do with his life. Back home, Francis realized that he had been wasting precious time. He became aware that he should be serving Jesus. He began by praying more and making sacrifices to grow strong in spirit. He often gave money to the poor, and once he even traded his own clothes for a poor man's rags so that he could experience the man's extreme poverty. He took care of the lepers in the nearby hospital. Still, he felt he must do more. Francis became a "knight" of the "Lady Poverty," and he began to live as a beggar. His food was whatever kind people gave him. Everywhere he went, he urged people to stop sinning and to return to God. Soon many began to realize how close Francis was to God, and they became his disciples.

That is how the great Franciscan family of priests and brothers, sisters, and lay people began. They helped the poor and sick and preached everywhere. He tried to make his life a copy of the life of Jesus. As a reward for his great love, Jesus gave him his own wounds in his hands, feet, and side. This happened in 1224, two years before Francis died. Saint Francis of Assisi tells the story of someone who followed God's call in a radical way. Those who read this book will begin to think also of the plan of their own life, the possibilities for their future, and the way in which God will play a part in how all this will unfold as they grow older.