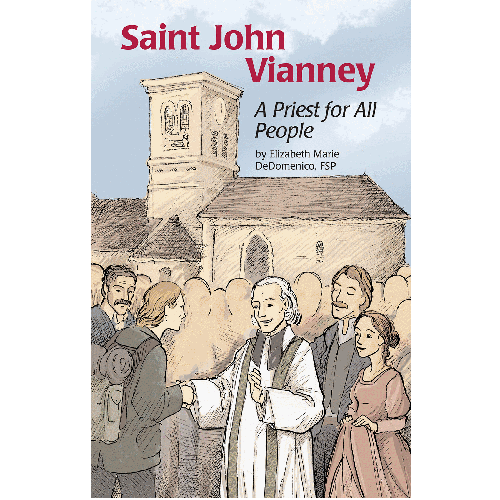 St John Vianney Priest For All People (Encounter The Saints)

John Mary Vianney was born near Lyons, France, in 1786. He loved to pray and when he was eighteen, he asked his father's permission to become a priest. John studied under Father Balley. The priest was very patient but Latin soon became a major problem for John. After much study, John was finally able to enter the seminary. Studies were hard. No matter how much he tried, he never did very well. When the final examinations came, they were spoken, not written. John had to face a board of teachers and answer their questions. Father Balley spoke up for John. He pointed out that John was a good and holy man, he was full of common sense, and he understood what the Church taught about the faith. It was agreed that these qualities made up for what John was lacking in learning and he was ordained. At first, he was appointed as Father Balley's curate, assisting him until his death in 1817. Then Father Vianney was sent to a little parish called Ars, where he would spend the rest of his life. When he first arrived, the people of Ars did not care much about their faith. They drank too much, worked all day Sunday, and never went to church. Many used terrible language. Father Vianney fasted and did penance for his people. He tried to stop them from sinning. Eventually, one tavern after another closed down because business became so slow. People began to worship regularly on Sundays and attended weekday Mass. The swearing was not so frequent. What had happened in Ars? "Our priest is a saint," the people would say, "and we must obey him." God gave John the power to see into people's minds and to know the future. Because of this gift, he converted many sinners and helped people make the right decisions. St. John Vianney was proclaimed a saint in 1925 by Pope Pius XI. The stories of saints open up new windows for a child's understanding of right and wrong, and the story of St. John Vianney is particularly powerful in doing this. A child who reads this story will also experience the value of the sacraments.

Add to Wish List
Read a Sample
About this item
Format:
Paperback
Pages:
128
Dimensions(Inches):
4.25 x 7.00
About the author
Sr. Elizabeth Marie DeDomenico is the author of another children's book, Saint Martin de Porres: Humble Healer. As a Daughter of St. Paul, she has dedicated herself to evangelization and has worked in Pauline Books & Media Centers in different parts of the U.S. She has a B.A. in theology from Franciscan University of Steubenville.
Reviews
Write Your Own Review