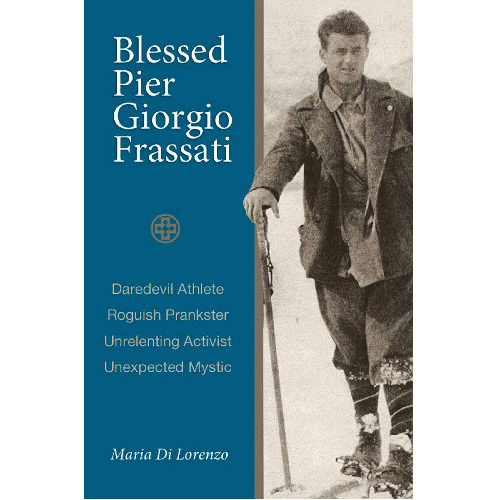 Athletic, handsome, and always good for a laugh, Pier Giorgio Frassati was the charismatic leader of a band of rowdy friends. He smoked, pulled pranks, relished extreme sports, fiercely debated politics into the night....and secretly gave away his wealth to help the poor: a mother unexpectedly widowed, a homeless invalid, a boy without warm clothes....and plunged eagerly into intense experiences of Eucharistic prayer.

An inspiring biography that captures Frassati's spirit, Blessed Pier Giorgio Frassati: An Ordinary Christian explores the adventuresome personality and forthright love of a man who succeeded in wresting holiness from everyday life.

This inspiring biography sheds new light on the all-too-short life of the young man John Paul II has called "a man of the Beatitudes."

Add to Wish List
Read a Sample
About this item
Format:
Paperback
Pages:
176
Dimensions(Inches):
5.25 x 8.00
About the author
Maria Di Lorenzo, a graduate in Modern Languages and a journalist, has worked for the daily newspaper, Il Tempo, for RAI, and for Vatican Radio. An expert in spirituality and religious issues, she is a regular contributor to various Catholic publications, an editor of websites dedicated to saints and exemplary people of our day, and author of several books.
Endorsements
"If you are interested in a book about Bl. Pier Giorgio Frassati, this is the one to get - or at least to start with. The other two books available in the U.S. are Man of the Beatitudes and His Last Days - My Brother Pier Giorgio, both written by Pier Giorgio's sister Luciana. If you're really interested in getting to know Pier Giorgio, I recommend these books as well, but they are not as succinct, nor are they as well written as Ordinary Christian. Man of the Beatitudes is written by his sister, is based on first hand accounts, and has a lot of great information. However, it jumps around a lot and doesn't read very well. There is also a flawed representation of Frassati's parents according Frassati's niece Wanda Gawronska, head of the Associazione Pier Giorgio Frassati. His Last Days is a better book, and a powerful telling of Pier Giorgio's tragic and heroic last six days. I highly recommend this very detailed acount of the last days of his life.

"Blessed Pier Giorgio Frassati: An Ordinary Christian is simply a much better biography. Well written, easy to read, filled with information, quotes, and pictures - it combines much of the information from the other two books and adds new information to produce a fine book that covers almost every aspect of his life personally, politically, and spiritually - including the process involved in his beatification.

"As the moderator of the Frassati Society at the Catholic high school where I teach, having a deep devotion to this amazing Christian, and having been blessed to personally meet and talk with Wanda Gawronska several times in Rome - it is my opinion that this is the best introduction to the life and witness of Bl. Pier Giorgio Frassati - perhaps the most relevant example of a devout and dynamic young Catholic life for the youth of today.

"By his example he proclaims that a life lived in Christ's Spirit, the Spirit of the Beatitudes, is 'blessed', and that only the person who becomes a 'man or woman of the Beatitudes' can succeed in communicating love and peace to others. He repeats that it is really worth giving up everything to serve the Lord. He testifies that holiness is possible for everyone, and that only the revolution of charity can enkindle the hope of a better future in the hearts of people (From Pope John Paul II's homily at the beatification Mass of Blessed Pier Giorgio Frassati, May 20, 1990)."
B. Watkins, Amazon.com customer review