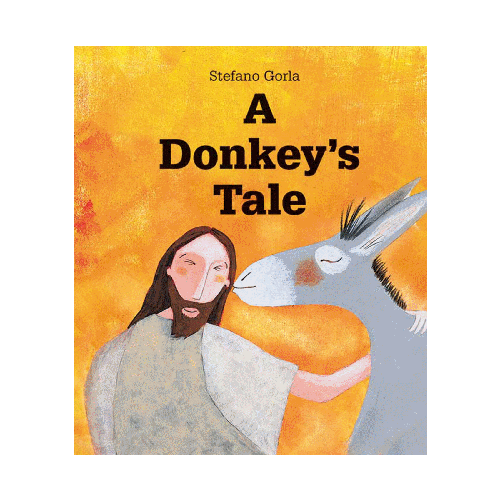 What better way to introduce your children to the life of Jesus than through a talking donkey?

Children are fascinated by animals: the interesting noises they make, their bright colors, the way they feel to the touch, and their unpredictable nature. Popular children's stories often feature animals or are even told from the perspective of an animal to capture the attention of young readers. Especially when it comes to passing on the faith to your children-whether you are a parent, teacher, friend, or relative of a child-animal stories can be a great tool for catechesis.

In this awe-inspiring tale, children join Ladan, a fictional donkey, as he accompanies Jesus from his birth to his ascension. This improbable witness imaginatively retells both familiar and not so familiar Gospel stories. Like Jesus' disciples, Ladan is present for Biblical events and shares Jesus' kind words, teachings, and miracles with us. From the nativity scene, to Jesus healing the centurion's servant, to the widow's two coins, to Jesus' resurrection, this collection provides a diversified selection of Biblical stories.

The phrase "...because I was there" is repeated by the donkey at the end of each story, emphasizing the importance of being a witness of and to the faith. Sensitively expressed and colorfully illustrated, A Donkey's Tale encourages children to also be witnesses to the faith by sharing what they have seen and heard about Jesus with others. Ideal for ages 6 - 8.

Add to Wish List
Read a Sample
About this item
Format:
Paperback
Pages:
64
Dimensions(Inches):
6.25 x 7.50
About the author
Stefano Gorla is an Italian Barnabite (religious) priest who loves cartoons and comics, reading, listening to music, and writing. A journalist and director of the weekly Il Giornalino and the monthly G Baby, he has also collaborated with many informational magazines. Gorla has written a wide variety of books inspired by the world of comics and the language of media. As the author of L'arcobaleno di Dio (God's Rainbow) and Come la pioggia e la neve (Like Rain and Snow), both illustrated by Franco Luini, he has created a way to pray with comics. With Paolo Guiducci, Gorla has established the "Fede a strisce" (Faith with comic strips) prize, to recognize comic books with religious themes. He has created characters for children and has organized shows, encounters, and courses of faith formation for both young people and adults.

Angela Marchetti was born in Siena, Italy but currently lives and works in Monza. Design and color have been her passions since she was a little girl. After working as a designer, Marchetti dedicated herself definitively to graphic art and illustration. She receives continual inspiration for her characters from observing her animal friends.
Reviews
Write Your Own Review