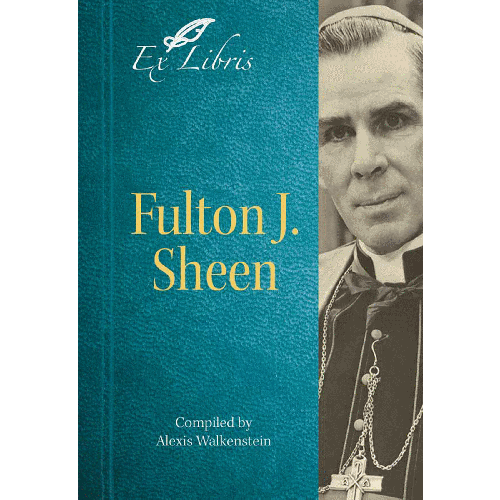 Venerable Archbishop Fulton J. Sheen was an influential figure in the Catholic Church throughout the 1950s and 60s, particularly because of his television shows and use of media to spread God's message. The man was more than just his television persona. Bishop Sheen wrote 73 books in his lifetime and imparted wisdom to the masses from his prominent platform with joy and warmth.

This book captures his wisdom in a concise volume. The lively writings included in this book demonstrate Sheen's signature clarity in teaching spirituality. Organized by theme, the book introduces readers to the bishop's thoughts on God's fire, human freedom, Divine love, sin, and knowing Jesus. The writings were carefully selected and compiled by Alexis Walkenstein, an advocate for the cause of Fulton J. Sheen and a notable Catholic media figure. Her love of this holy man helps communicate his vigor for life, his affection for all people, and his encouraging ideas about the faith and God's love for us.

Sheen's words speak for themselves in providing a vital lifeline of clarity to the Catholic faith. This volume brings together his most powerful thoughts and presents them to even the most unfamiliar reader. Whether readers have known Bishop Sheen since his days on TV or they are just meeting him now, this book gives a valuable sense of his important spiritual ideas.

Add to Wish List
Read a Sample
About this item
Format:
Paperback
Pages:
144
Dimensions(Inches):
5.00 x 7.25
About the author
Alexis Walkenstein is an Emmy award-winning journalist turned public relations professional working to evangelize the culture with positive media. With over 20 years media experience in major markets such as Washington D.C., New York, and Atlanta, Alexis' career began in Boston at WHDH-TV (NBC) where she managed story assignments and editorial content managing the station's coverage of historic events such as the 9/11 terror attack, the death of John Kennedy Jr., the crash of TWA #800, the sex abuse scandal in the Catholic Church and the death and funeral for Saint John Paul II. Alexis went on to serve the Diocese of Palm Beach as director of communications and chief spokesperson, a position she held for five years under Bishop Gerald M. Barbarito. Alexis promotes, movies, celebrities and other popular culture. Some of her projects include, Soul Surfer, The Way, For Greater Glory, The Mighty Macs, Restless Heart, Little Boy, Captive, The Young Messiah and Ben-Hur. Alexis currently resides in Los Angeles and while she's promoting everyone else's movies, she's secretly plotting her own! Alexis speaks on topics of faith and culture around the U.S.
Reviews
Write Your Own Review