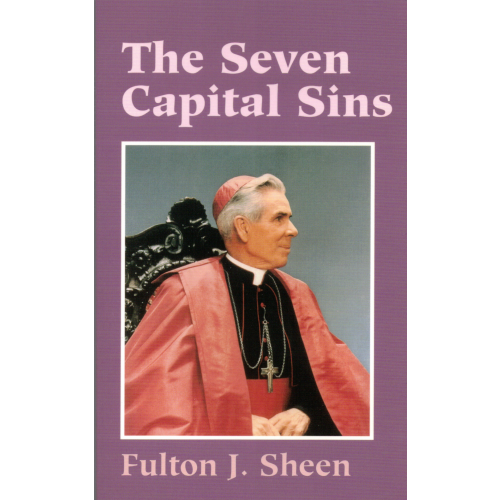 Sheen Fulton
Be the first to review this product
$6.95
Item Code
100930
EAN/UPC
9780818908910
Publisher
Alba House
Anger, envy, lust, pride, gluttony, sloth and covetousness are the seven capital, or deadly, sins so often spoken of by theologians in the past. They are hardly mentioned today in a society become inured to the whole idea of sin. Yet, as Fulton Sheen makes clear in his inimitable way, these sins are very real with very real consequences for our happiness in this world and in the next. Jesus atoned for each one on the cross and addressed them individually in the words He spoke as He hung there dying. In a series of eight addresses delivered over the radio on the Sundays from February 26 to April 9, 1939, Sheen correlated the Seven Last Words from the Cross with these Seven Capital Sins and shows in a final Easter Sunday sermon, also presented here, how when we make God the enemy, we can never be sure that we have won the day. When God is our ally, as He was on the Cross, we can be sure that the victory is ours. These brief meditations are as applicable to our world today as they were on the day they were first penned.
Add to Wish List
About this item
Format:
Paperback
Pages:
120
Dimensions(Inches):
4.50 x 7.00
About the author
Archbishop Fulton J. Sheen (1895-1979) needs no introduction to the millions who enjoyed listening to him on radio or watching him on TV during the 1940's, 50's and 60's when his ratings went through the roof. A pioneer in the use of the mass media — radio, television and the press — to convey the truths of the Gospel to people of all religious and ethnic backgrounds, he attributed his phenomenal success to the grace of God, lots of study, and intense personal prayer.
Reviews
Write Your Own Review