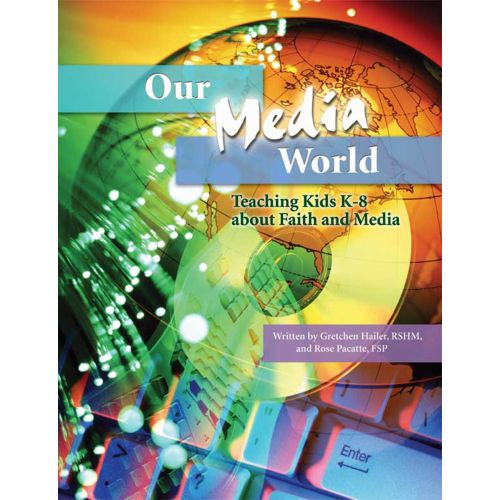 Media literacy experts Hailer and Pacatte have written yet another invaluable resource on media mindfulness. Whether you're a catechist, teacher, or parent, Our Media World: Teaching Kids K thru 8 about Faith and Media will provide you with an exciting and engaging strategy for introducing your students to the principles of media mindfulness.

From music and movies to advertising and the Internet, our everyday lives are filled with the sights and sounds of media.Our Media World teaches critical thinking skills, anchored within the Catholic worldview, so that children can effectively engage in all forms of media within our modern world from a Gospel perspective.

Add to Wish List
Read a Sample
About this item
Format:
Spiral
Pages:
160
Dimensions(Inches):
8.25 x 10.75
About the author
Gretchen Hailer, RSHM, has been involved in catechesis and media education for over thirty years. She is a frequent consultant and presenter regarding faith formation and communications. Sr. Gretchen is the author of a number of books, including Believing in a Media Culture (St. Mary's Press, 1998), and Echoing the Word (Paulist Press, 2008), a parish-based catechist formation process. With Rose Pacatte, FSP, she co-authored Media Mindfulness: Educating Teens about Faith and Media (St. Mary's Press, 2007).

Rose Pacatte, FSP, is the director of the Pauline Center for Media Studies in Los Angeles. She is a noted national and international media literacy specialist, award-winning author of books on Scripture and film, the film/TV columnist for the national Catholic magazine, St. Anthony Messenger, and a regular contributor to several Catholic educational and catechetical publications.