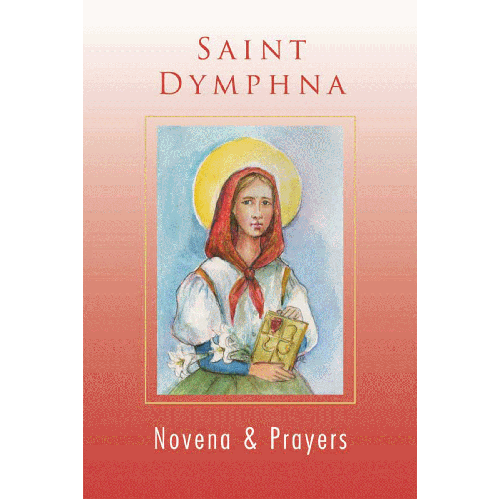 St. Dymphna has gained great popularity as the patroness of those who suffer with mental or emotional problems. Ancient traditions state that when Dymphna was a teenager her mother died, and her father, a petty king of Oriel wanted to remarry a woman as beautiful as his wife who had just died. He slipped into mental illness and desired to marry his daughter. Dymphna was advised to flee the country which she did along with the priest who had instructed her for baptism, Fr. Gerebran, and two servants. Her father, who pursued her, killed her in a fit of rage. Dymphna and Fr. Gerebran were buried in a cave. Years later when the villagers decided to move the bodies for a more suitable burial they found in the cave two beautiful tombs, whiter than snow. Soon miraculous cures began to occur. St. Dymphna's fame as patroness of those who suffer with mental and emotional problems spread widely and people came to her shrine on pilgrijmage. Later a hospital was build near her shrine for the cure of mentally ill patients. After some time spent in the institution, most patients are placed in a home of one of the families of Gheel. St. Dymphna is invoked as the patron of those suffering from mental and emotional problems, mental health care workers, and abuse victims.

The tradition of praying novenas has its roots in the earliest days of the Church. Christians have always prayed for various needs, trusting that God both hears and answers prayer. The word "novena" derives from the Latin term novem, meaning nine. In a novena we pray a prayer for nine days. "But," we might wonder, "doesn't God know our needs before we event ask? Isn't praying once for something enough?" Although we believe in God's love for us, something we need to remind ourselves of this. Although we know we are held in God's hands and that God will not let go, sometimes we need reassurance. What may appear to be mere repetition in a novena is really a continual act of faith and hope in our loving God.