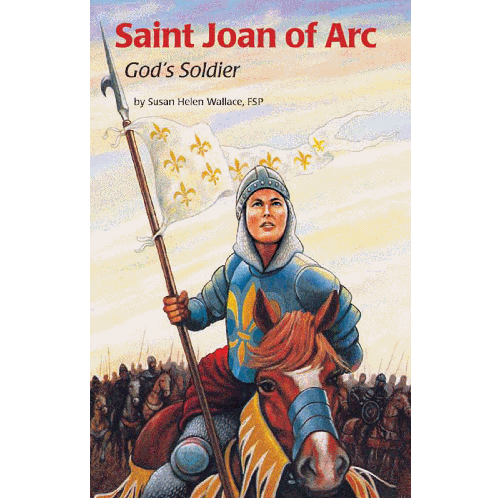 Joan was born in 1412. Her hometown was Domremy, a little village in France. Jacques d'Arc, her father, was a hardworking farmer. Joan loved to pray, especially at the shrines of our Blessed Mother. But this honest little peasant girl was to become a heroine....One day while Joan was watching her sheep, St. Michael the Archangel, the patron of her country, told her, "Daughter of God, go save France!" For three years she heard the voices of saints calling her to action. When she was sixteen, she began her mission.

At that time, there was a war going on between France and England. It was called the Hundred Years' War. England had won so much French land that the king of England called himself the king of France, too. The real French king was weak and selfish. He thought that the French armies would never be able to save the country. After being examined by many priests and experts to make sure that she really was seeing visions of the saints and really had been given a special mission to carry out, Joan received permission to lead an army into the French city of Orleans, which the English had almost captured. In her white, shining armor, this young teenager rode with her banner flying above her. On it were the names of JESUS and MARY.

Joan was wounded by an arrow in the great battle of Orleans, but she kept on urging the men in her army to victory. After the victories, Joan's time of suffering began. She was captured and sold to the British. She was put in prison and falsely charged with witchcraft and heresy. After an unfair trial Joan was burned at the stake on May 29, 1431. Joan was not even twenty, yet she went bravely to her death. The last word on her lips was "Jesus."

Four hundred and eighty-nine years later, on May 16, 1920, Pope Benedict XV proclaimed Joan a saint. Saint Joan of Arc: God's Soldier is the action packed story of a young woman who wouldn't back down when she knew was right, no matter what others said. A child who reads Saint Joan of Arc will encounter in an exciting way the courage with which the Christian life is filled.