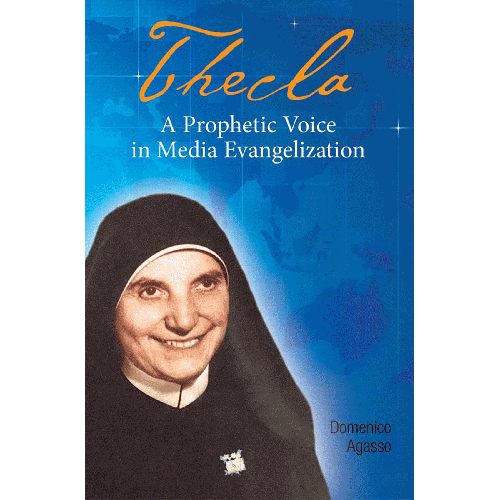 With amazing insight, author and journalist Domenico Agasso enters into the dynamic world of Venerable Thecla Merlo, cofoundress of the Daughters of St. Paul, a congregation dedicated to the spread of the Gospel using all the means of communication.

Thecla: A Prophetic Voice in Media Evangelization traces Mother Thecla's path through the first half of the twentieth century when she first emerged as the humble leader of a new adventure in the Church's history. As early as 1915, she believed that women could be associated with the active preaching apostolate through the "Good Press," and in collaboration with Blessed James Alberione, she made that charismatic gift to the Church a reality.

Availing himself of a wide array of documentation and using his characteristic flair, Domenico Agasso sketches out the profile of this prophetic woman who was quite extraordinary in the monumental tasks she accomplished. Thecla Merlo, one of the first members of the Daughters of St. Paul, collaborated in all of its charismatic and organizational development. This gathering of young women became a religious congregation with a complex media apostolate, and she their first Superior General. Their media ministry started out humbly with simple typesetting-by-hand of a diocesan newspaper, slowly grew into publishing on a large scale, and later branched out into radio, records, and film. Through it all, Thecla was moved by only one intention: "To do good" by spreading the Gospel.

Thecla's uncommon gifts, unshakable confidence in God, and broad vision made her a prophetic voice for evangelization. Today she is a model for the young men and women involved in the New Evangelization who seek to influence others by using every type of media to share the Gospel and the Church's wisdom. Her gift and spirit continue today through the Daughters of St. Paul, the congregation she cofounded with Blessed James Alberione, which consists of more than 2,250 members in more than fifty countries. This book is being issued as part of the congregation's centenary celebration.

Add to Wish List
Read a Sample
About this item
Format:
Paperback
Pages:
304
Dimensions(Inches):
5.25 x 8.00
About the author
Domenico Agasso
Reviews
Write Your Own Review