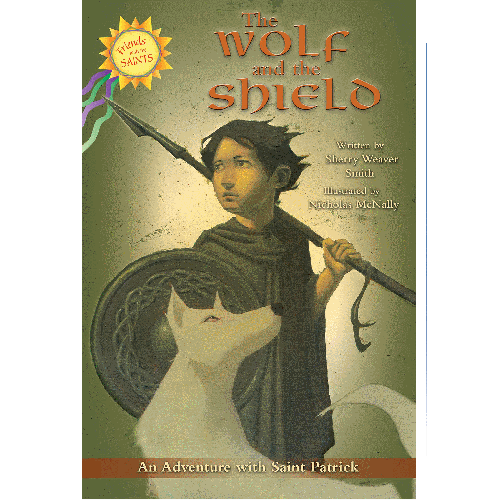 Kieran is braver and stronger than most eleven-year-old boys. And ever since his father's death, he's been doing his best to take care of his mother and little brother. In fifth-century Ireland, though, there aren't many options. When Kieran rescues a wolf pup and meets Saint Patrick, his choices become even more difficult.

Should he leave home to join Carrick's warriors? Will someone discover the wolf he's been hiding and kill it?

But the hardest question for Kieran to answer is the one Patrick had asked him on a moonlit night: What does your heart hunt for?

Join Kieran as he cares for an orphaned wolf pup and searches for a shield strong enough to protect everything-and everyone-he loves.

Filled with well-researched facts about the people, animals, and customs of fifth-century Ireland, The Wolf and the Shield is historical fiction for children ages 7 - 10. Exciting and fast-paced, this adventure novel explores what friendship with a saint might be like, showing Saint Patrick as approachable and understanding of the challenges of a young boy.

The Wolf and the Shield: An Adventure with Saint Patrick will stimulate young imaginations to realize that the saints are holy but also human and approachable, and they are always good friends.

Add to Wish List
Read a Sample
About this item
Format:
Paperback
Pages:
192
Dimensions(Inches):
5.50 x 8.25
About the author

Sherry Weaver Smith became Catholic after working alongside Salesian Sisters who were dedicated to helping homeless and working children in Manila, the Philippines. Married to Michael, Sherry wrote her first poems and children's fiction for her daughter, Laura. Her haiku collection, Land Shapes, has been published by Richer Resources Publications. Sherry has also worked in various product management and grant-writing positions for healthcare companies and nonprofit organizations. She received her bachelor's degree from Duke University in math and East Asian studies, and a master's in politics from the University of Oxford, England. The Wolf and the Shield is Sherry's first adventure with Pauline Kids.

Endorsements
"I would recommend this book because it taught a lesson that you should always trust in God and it had a lot of action"
- Dawson, Fourth Grade, Resurrection Catholic School, Lancaster Pennsylvania
Reviews
Write Your Own Review