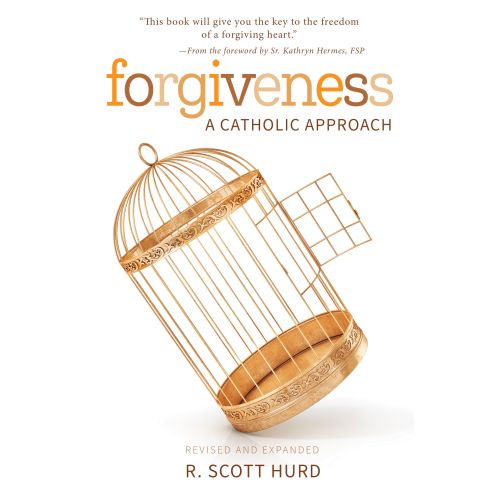 This revised and expanded edition of Forgiveness: A Catholic Approach will equip and inspire you to move toward forgiving those who have hurt you. With the power of God's grace, you can work through the process of forgiveness and find freedom in Christ.

This book teaches all about forgiveness: what forgiveness is and what it isn't; how to forgive and why. It addresses questions that Catholics grapple with today more than ever before: forgiving the Church; working with anger; forgiving when we can't reconcile; forgiving and not condoning behavior; and how forgiveness doesn't mean we forget, but helps us remember differently.

Filled with many vignettes of contemporary transgressions that have been transformed through acts of forgiveness-including situations of domestic violence, the Rwandan genocide, and the attacks of September 11, 2001-author Scott Hurd insightfully includes a chapter on "Forgiving the Church," which many believers will find helpful as we continue to struggle with the revelations of sexual abuse by clergy and its cover-up.

Hurd's Forgiveness: A Catholic Approach faithfully reveals the many misunderstood dimensions of forgiveness: it's not something to be earned, forced, or deadline-driven. Forgiving is a decision, a process, and often a lifelong journey.

Add to Wish List
About this item
Format:
Paperback
Pages:
128
Dimensions(Inches):
5.25 x 8.00
About the author

Scott Hurd is Vice President, Leadership Development, for Catholic Charities USA, and holds degrees from Oxford University (UK) and the University of Richmond. He has authored five books and won writing awards from both the Association of Catholic Publishers and the Catholic Press Association. Scott lives in Virginia with his family.

Forgiveness: A Catholic Approach, his first book, received an "Excellence in Publishing" award from the Association of Catholic Publishers.

His third book, "When Faith Feels Fragile: Hope for the Wary, Weak, and Wandering," received an award in 2014 from the Catholic Press Association, placing second in the "Popular Presentation of the Catholic Faith" category. Also, in April of that year it was designated a finalist in the Association of Catholic Publisher's "Excellence in Publishing" award competition in the "Inspirational" category.

He currently lives in his hometown of Alexandria, Virginia, with his three children.

What Are People Saying about this Title

In this book, Forgiveness: A Catholic Approach, Scott Hurd gently leads people, hurt by the injustices of others, on a journey in which they meet the mercy and unconditional love of God. The reader then is challenged to give this love to those who offended them. It is a journey of encounter: knowing pain, seeing Jesus' pain on the cross, and responding to the pain with the light of love. This is a very important book that I highly recommend to those who want to heal and deepen their Catholic faith.
-Robert Enright, PhD, Professor of Educational Psychology, University of Wisconsin-Madison, and Founding Board Member, International Forgiveness Institute, Inc.

This book is the answer for all who want to learn how to forgive. Special attention is paid to those who have experienced abuse by an intimate partner. With compelling real-life stories and deep insights, Mr. Hurd describes how the process of forgiveness is both possible and necessary, even in abusive circumstances.
-Sharon A. O'Brien, PhD, Director, Catholics For Family Peace Education and Research Initiative, National Catholic School of Social Service, The Catholic University of America

In a world where unforgiveness can be a cultural badge of honor, this book instructs us on the power of forgiveness-not a weakness, but a liberating grace. Who among us doesn't need this message of forgiveness?
-Alexis Walkenstein, national speaker and host of Mary's Touch radio program

Scott Hurd in his new revised edition of Forgiveness: A Catholic Approach provides readers with a powerful and timely manual on the art of forgiveness-- an essential virtue if there ever was one-- for these terribly divided times in which we find ourselves living. Written from a Catholic perspective but with lessons applicable for all regardless of religious belief, Hurd takes readers through an exploration of forgiveness in its entirety: from why we forgive; to what we forgive; and how we go about doing it on a personal, familial, and societal level. He finishes off with ten concrete steps on how we ourselves can make the journey from hurt through to forgiveness. Filled with many vignettes of contemporary transgressions that have been transformed through acts of forgiveness--including situations of domestic violence, the Rwandan genocide, and the attacks of September 11, 2001--Hurd insightfully includes in his book a chapter on "Forgiving the Church," which many believers will find helpful as we continue to struggle with the revelations of sexual abuse by clergy and its cover-up. For those who work in the social ministry of the Church, Hurd's book also provides thoughtful discussion questions after each chapter, which makes this book an excellent choice for small group discussion on this essential Christian virtue. In a world and in a Church in desperate need of reconciliation, this book makes an important contribution to the steps we all must take to bring healing to ourselves and the world.
-Tom Dobbins Jr., the Justice and Peace Coordinator of Catholic Charities of the Archdiocese of New York, a Producer for the JustLoveradio broadcast on Sirius/XM's Catholic Channel, and the National Chair of the Roundtable Association of Catholic Diocesan Social Action Directors.

Scott Hurd's Forgiveness: A Catholic Approach faithfully reveals the many misunderstood dimensions of forgiveness: it's not something to be earned, forced, or deadline driven. Forgiving is a decision, a process, and often a lifelong journey. This accessible, wise text sheds light on common obstacles to forgiveness like demonization and paralyzing guilt while acknowledging the courage it takes to move through incredible pain and immense anger. Forgiveness isn't about forgetting the hurt, it's about finding new ways to remember God's boundless mercy.
-Krisanne Vaillancourt Murphy, Executive Director of Catholic Mobilizing Network and Co-author of Advocating for Justice: An Evangelical Vision for Transforming Systems and Structures