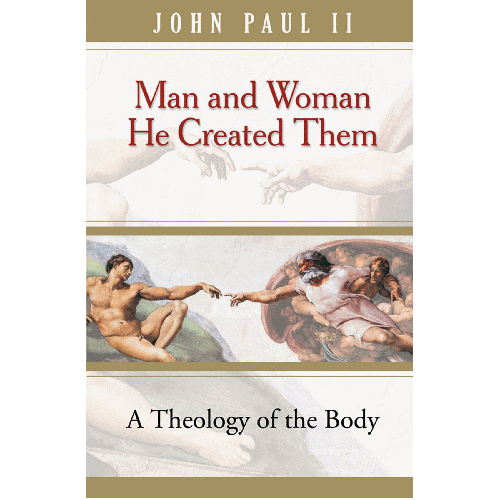 Man & Woman He Created Them Theology Of The Body

"A stunningly beautiful look at what it means to be human."

Man and Woman He Created Them is the title John Paul II gave to his seminal work on the bodily dimension of human personhood, sexuality, marriage, and celibacy. First written while he was Archbishop of Kraków, then later revised and delivered as a series of catecheses after he became pope, this work was called "theology of the body" by John Paul II himself. In his momentous teaching, John Paul has left us the core of his great vision, focused on the mystery of love extending from the Trinity, through Christ's spousal relation with the Church, to the concrete bodies of men and women. With keen insight into the modern "split" between the person and the body, he presents an integral image of the human person, one rooted in Sacred Scripture and the Church's living tradition.

This translation of the Pope's work, prepared by biblical scholar Michael Waldstein, allows us to enter into John Paul II's profound vision. With the inclusion of material previously unpublished in Enlgish, and the rediscovery of John Paul's own headings for the work, the reader is able to follow the pope's thought with clarity and confidence.

Complete with a comprehensive introduction, translator's footnotes, and detailed index, this edition has been crafted with the kind of insight that builds more than twenty years of scholarship on John Paul II's great gift to the Church.

Add to Wish List
Read a Sample
About this item
Format:
Paperback
Pages:
735
Dimensions(Inches):
6.00 x 9.25
About the author
Michael Waldstein is Chancellor and Francis of Assisi Professor of New Testament at the International Theological Institute, Austria. Together with his wife, Susie, he is a member of the Pontifical Council for the Family. Prof. Waldstein earned a B.A. at Thomas Aquinas College, California, a Ph.D. in Philosophy at the University of Dallas, an S.S.L. in Scripture from the Biblicum in Rome, and a Th.D. in New Testament and Christian origins at Harvard Divinity School. Before his present appointment, he was Associate Professor of New Testament at the University of Notre Dame. He and his wife have eight children.
Available Digital Formats
Endorsements
"Michael Waldstein is going to put many people in his debt with this superb piece of work, a labor of love shaped by an acute intelligence. The illuminating translation, the brilliant introduction, and the carefully crafted index will make this the standard English-language edition throughout the twenty-first century for scholars, for pastors, for students, and indeed for anyone interested in exploring John Paul II's most creative contribution to human self-understanding."
George Weigel, Senior Fellow, Ethics and Public Policy Center

"This book is indeed one of the milestones of Christian Philosophy and Theology. This book along with C.S. Lewis' Mere Christianity, are the MASTERPIECES of 20th Century Christian Philosophy. Where Lewis turns the tide and challenges the Atheism of Bertrand Russell by giving a powerful case for and introduction to Christianity, John Paul the Great presents a stunningly beautiful look at what it means to be Human. He sets up a dam to the line of reasoning that led to the "Sexual Revolution' and ultimately to the Utilitarian ethics at the root of the Culture of Death. His presentation of the true meaning of Human Sexuality gives one deep insight to what and why we are. His THEOLOGY OF THE BODY is an antidote to the rhetoric of Alfred Kinsey, Peter Singer, and Richard Dawkins who reduce man to mere organic compouds. We are reflections of the One who has made all things. We are Loved children who are called to Love. This insight can radically change the one who accepts it. Please read this work with an open heart and mind. "
M. Hernandez, Amazon.com customer review

"John Paul's Theology of the Body has been highly lauded as one of the greatest (if not the greatest) exposition on Christians sexual ethics, with a focus on the human person and the gift of the body. It is perhaps JPII's greatest gift to the Church, especially as it was/is critical in the renewal of the Church after the devastating effects of the sexual revolution of the sixties and the irresponsible and childish rebellion of certain Catholic academics. For a greater appreciation of this work, one can do well to consult the more philosophical works, Love and Responsibility and The Acting Person. The work of Dietrich von Hildebrand would also be a great supplement. On a lighter side, Dawn Eden's The Thrill of the Chaste would be a fine example of how JPII's theology of the body is influencing the younger generation."
K. Davis (Charlotte, NC), Amazon.com customer review.