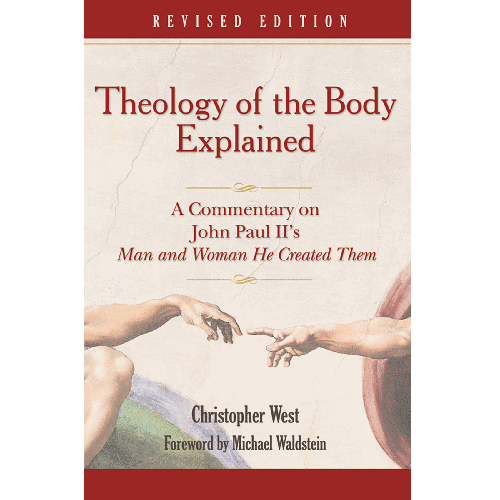 Theology Of The Body (Rev) Explained Commentary Of John Pau

"Professor West has done the world a great service in promoting John Paul II's magnificent celebration and defense of the human person."

The first edition of Theology of the Body Explained (2003) quickly became a Catholic bestseller, serving as a standard reference text in universities, seminaries, and private study. This newly revised and expanded edition (2007) is based on Michael Waldstein's much improved translation of John Paul II's catechesis published by Pauline Books & Media under the title Man and Woman He Created Them: A Theology of the Body (2006).

Key insights discovered through Dr. Waldstein's access to the John Paul II archives have been incorporated.

The newly discovered headings of the Pope's original text have been incorporated.

The illuminating insights of John Paul II's six undelivered and previously untranslated addresses on the Song of Songs, Tobit, and Ephesians are unfolded here for the first time.

The Prologue has been thoroughly revised, updated, and expanded based on new insights into the mind of Karol Wojtyla/John Paul II.

Add to Wish List
Read a Sample
About this item
Format:
Paperback
Pages:
530
Dimensions(Inches):
6.00 x 9.25
About the author
Christopher West is recognized around the globe for his work teaching and promoting John Paul II's theology of the body. He serves officially as a research fellow and faculty member of the Theology of the Body Institute near Philadelphia. West has also taught graduate and undergraduate courses on a number of other faculties, including St. John Vianney Seminary in Denver, the John Paul II Institute in Melbourne, Australia, and the Institute for Priestly Formation in Omaha. He is the best-selling author of four books, and his popular column "Body Language" is syndicated to newspapers throughout the United States. Christopher lives with his wife Wendy and their four children near Lancaster, PA.
Endorsements
"The first edition of this work was magnificent. This new edition is even more so. No one, in my opinion, has thought more deeply about John Paul II's mind-opening theology of the body than has Christopher West. The result is a book that lives up to its title, for it surely does 'explain' the theology of the body accurately, clearly, and in such a way that any intelligent person can understand. Quite an accomplishment!"
William May, Professor, John Paul II Institute for Studies on Marriage and Family

"We owe a debt of gratitude to Christopher West. Since he first discovered the Theology of the Body in 1993, he has been a pioneer in the difficult task of seeking the right language with which to explain John Paul II's difficult theological and philosophical teaching. This newly revised commentary is the fruit of West's own ever-deepening understanding and integration of the material. West's work offers readers an excellent entry and much solid assistance in decoding John Paul II's difficult text. It will encourage them to read John Paul II himself with more open eyes and with clearer reflection."
From the Foreword by Michael Waldstein, Founding President, International Theological Institute, Austria

"Christopher West is a well-established name as a popularizer of John Paul II's Theology of the Body. This book differs from West's other works in being a systematic commentary on the pope's 129 noontime talks on the meaning of the human body according to Catholic Christianity, which we given over five years early in his pontificate (1979-1984).