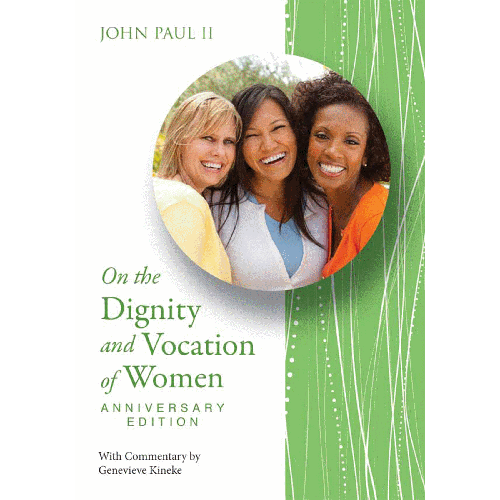 Published on August 15, 1988, Mulieris Dignitatem explores the role and value of women in relation to the Church, the family, and society. In this apostolic letter, Pope John Paul II promotes a vision of complementarity, equality, and communion between man and woman. Within this framework, he stresses the importance of a woman's capacity to love and her femininity-and in particular, sensitivity, to others. He also explains the physical and spiritual dimensions of marriage, virginity, and motherhood. Citing women from the Gospels, female saints, and Christian women who have made significant contributions to society, he expresses the Church's reverence for women. Special focus is placed on the Blessed Virgin Mary, the archetype of woman and the "New Eve."

This expanded 25th Anniversary Edition offers the complete text of the letter, along with thought-provoking commentary by Genevieve Kineke, who addressed the Vatican Congress marking the 20th anniversary of the document in 2008. With her conversational style, she makes the content of the papal document more accessible and offers contemporary insights that respond to the urgent questions raised in recent decades about the feminine vocation. Insightful questions suited for individual or group use, applicable prayers, and ideas for meaningful action engage you in your reading experience.

From workplace equality, to reproductive rights, to domestic abuse, women's issues are highlighted in societies worldwide, especially in recent years with the new wave of feminist movements. Whether you are revisiting or introducing yourself to this letter, this anniversary edition provides a framework from which you can explore current women's issues from a Catholic perspective. Adult faith formation groups, students, and fans of John Paul II and/or Theology of the Body will greatly profit from this annotated text.

Add to Wish List
Read a Sample
About this item
Format:
Paperback
Pages:
96
Dimensions(Inches):
5.00 x 7.25
About the author

Genevieve Kineke is a convert to the faith who was immediately drawn to the question of what it means to be a woman in the image and likeness of God. In 1992, she founded Canticle, a magazine dedicated to that question, which she edited for twelve years. In 2006, she wrote The Authentic Catholic Woman (Servant Books), followed by Set Free: The Authentic Catholic Woman's Guide to Forgiveness (Servant Books, 2012). She has spoken widely on the topic and was invited to address the Vatican Congress marking the 20th anniversary of Mulieris Dignitatem in 2008. She is married and the mother of five children.
Endorsements
"Saint John Paul II's landmark apostolic letter for women, Mulieris Dignatatem brought the feminine genius to our lexicon, beginning a quiet revolution of a new feminism characterized by an integration of gospel values. Twenty-five years later, this Anniversary Edition of Mulieris Dignatatem in the Year of Faith is the right occasion to reintroduce this document to the next generation. Genevieve Kineke's thoughtful commentary after each of the document's nine chapters offers readers a contemplative unpacking of the pontiff's words, plus guides for them to ponder, pray, and act. This is a marvelous keepsake book, as well as a learning tool."