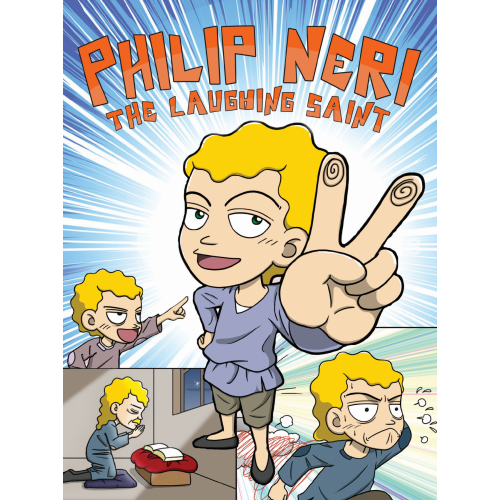 The story of St. Philip Neri, patron of joy and of laughter, is told in a full-color, graphic novel biography for children ages 9 - 12.

The Shounen-Manga style graphic novel highlights the humorous spirit of Philip Neri, a son of nobility. When he goes to live with his uncle to learn business skills, he experiences a religious conversion. Full of enthusiasm, Philip moves to Rome to study under the Augustinian rule, dedicating his time, money, and energy to helping the poor. It was then that he co-founded the Confraternity of the Most Holy Trinity, which helped millions of the poor in Rome. Prayerful as well as active, Philip popularized the 40-hour devotion of the Blessed Sacrament. After being ordained a priest, he became a beloved confessor for many, and he founded the Congregation of the Oratory for diocesan clergy.

This loveable saint comes alive for young readers as they are introduced to the challenges he lived as he served Christ and the poor in the streets of Rome. His story is a fun and engaging way to give young readers a view of the priesthood. Saint Philip's self-sacrifice and his unique use of proverbs will inspire all readers to live out Christ's call in their own lives.

Add to Wish List
Read a Sample
About this item
Format:
Paperback
Pages:
170
Dimensions(Inches):
6.00 x 8.00
Endorsements
"If you aren't familiar with the cartoon style used in this book-Shounen-style manga-it might take some getting used to. But the story of Saint Philip Neri really comes to life in a fun way. To me, the most amazing aspect of this graphic novel is the powerful portrayal of the Sacrament of Reconciliation."
- Sr Maria Grace Dateno, FSP, author of Gospel Time Trekkers series

"Philip Neri: The Laughing Saint is a children's book in the Shounen-style. This means that it is aimed at boys, high-action, and lots of humor. Some of the most popular mangas in Japan are Shounen and include series such as Dragon Ball, Naruto, and InuYasha. Unlike traditional Japanese manga, this title reads from left to right. My guess is that this was done to avoid confusion among those unfamiliar with this comic style. The artwork is spot on in the characters having over-exaggerated eyes and the sound effects where necessary.

The book begins with a classmate asking Philip for help with their Latin work. Philip is too distracted to help, because he is focusing on his hunger and all the bananas being gone. There are plenty of comical pieces like this littered throughout the book. However, behind the immaturity, the love for people is seen on almost every page, in Philip's words and deeds. All he wants to do is help take care of the poor and those less fortunate than him. He is able to do this both physically (curing illnesses) and spiritually (in the sacrament of Confession where he helped a young man who had a problem with stealing). This great saint never gave up on people, and that caused the people to never enter ultimate despair by turning away entirely from God. The book closes with information on his canonization and a list of his sayings and maxims. This was an exciting read and one that will greatly appeal to boys ages 10 and up. I even know some 30+ men who will enjoy this book as well."
- Stuart Dunn, Stuart's Study book review blog