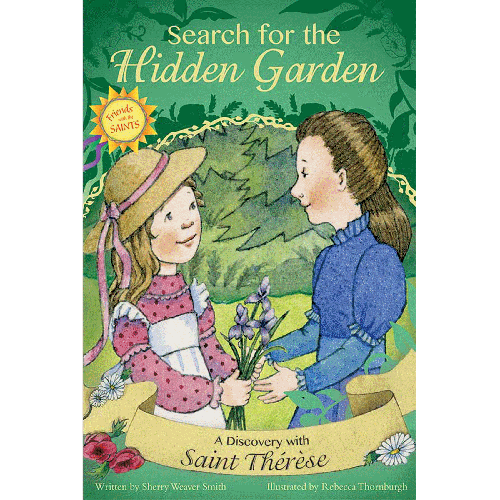 Search for the Hidden Garden Discovery with St Therese

A Discovery with Saint Therese

In Search for the Hidden Garden, readers meet Saint Therese as a fifteen-year-old living in Lisieux in the months before entering her Carmelite convent. An imaginative historical novel, the story focuses less on Therese herself and more on the ways she helps the heroine, Charlotte Delacroix, grow in her love for Jesus.
This welcome addition to Pauline Kids' Friends with the Saints series takes readers into the heart and mind of a young girl coming to grips with life and unraveling a mystery but is the mystery the location of a hidden garden for children, or is it the mystery of how to create a life by doing "small, good things" for others and thereby for God?
Sherry Weaver Smith follows up her acclaimed novel The Wolf and the Shield with the story of a friendship that transcends social class, life's challenges, and even death itself.

Add to Wish List
Read a Sample
About this item
Format:
Paperback
Pages:
128
Dimensions(Inches):
5.50 x 8.25
About the author
Sherry Weaver Smith became Catholic after working alongside Salesian Sisters dedicated to helping homeless and working children in Manila, the Philippines. Weaver Smith wrote her first poems and children's fiction for her daughter, Laura. Her haiku collection, Land Shapes, was published by Richer Resources Publications. Weaver Smith received her bachelor's degree from Duke University in math and East Asian studies, and a master's in politics from the University of Oxford, England.
Endorsements
"This story allows the reader to get to know the historical Thérèse (from her own biographical writings) as a real girl and not just a saint from long ago."
- Catholic Library World
Reviews
Write Your Own Review