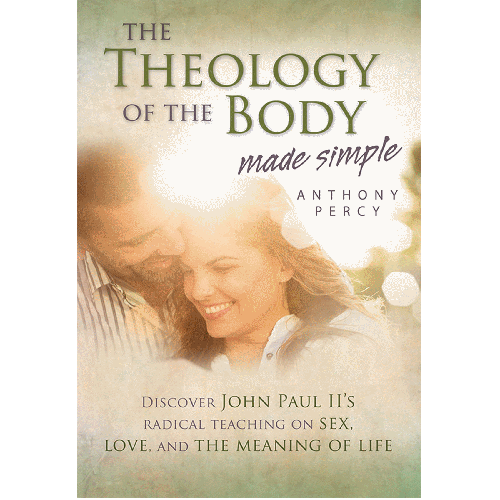 Percy Anthony
Be the first to review this product
$11.95
Item Code
136008
EAN/UPC
9780819874191
Publisher
PBMJP
Sex matters. Yet even deeper that the urge for sex is the desire for love. More than sexual, we are relational: meant for true and intimate relationship with each other and with God.

Rather than a casual indoor sport, sex is sacred. And John Paul II's radical perspective on how we view life, love, and sexuality can transform our relationships into profound experiences of communion.

This is a simple introduction to the basic premise of the Theology of the Body. It explains how our bodies are symbolic, free, meant for love, and redeemed by Christ. It presents unambiguous reasons for the Church's teaching on premarital sex, contraception, homosexuality, pornography, and more. And it gives reason to hope that the love we crave so deeply is, in fact, promised us by God-from the beginning.

Add to Wish List
Read a Sample
About this item
Format:
Paperback
Dimensions(Inches):
5.00 x 7.25
About the author

Rev. Anthony Percy is a priest of the Archdiocese of Canberra & Goulburn, Australia. His doctorate in Sacred Theology is from the John Paul II Institute in Washington, D.C.

"Finally, a book that presents the thought of Pope John Paul II in a clear and concise manner! It makes his teachings on this often complex subject available to a popular audience."
Marianne Luthin, Director, Pro-Life Office, Archdiocese of Boston

"Church teachings on sexual morality are not intended to enslave us to some out-dated or unreachable moral code. They are based on the dignity and worth of each individual. Mr. Percy provides this readable and brief summary of Pope John Paul II's teaching on the foundations of sexual morality in this handy little volume. Some have called the 'theology of the body' that John Paul taught, 'a theological time bomb.' It has been just that and the impact is not over. John Paul gave the best and most intellectually stimulating challenge yet to the so-called 'sexual revolution' of the 20th century. The reverberations of this teaching will be felt for centuries.

"If you have ever had difficulty explaining to young people the reasons for sexual purity, you need this book. Share it with them as well. Find out what John Paul meant when he talked about, original solitude, original unity, original nakedness, and original sin. What you find may just be another sexual revolution in your heart. It is a theology of freedom, not slavery."
S. Doxha Theon (Richmond, Missouri), Amazon.com customer review