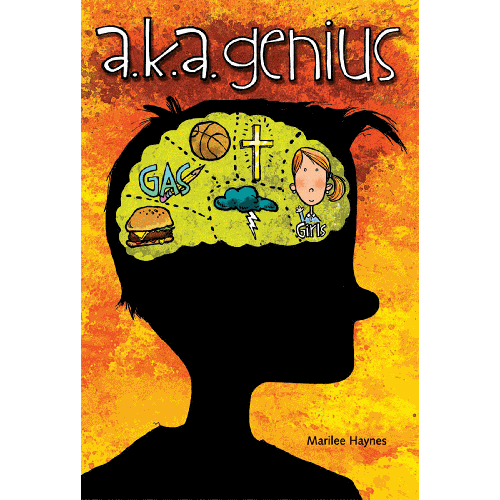 When you don't get straight As and you have to spell H-I-P-P-O-P-O-T-A-M-U-S instead of H-O-R-S-E when you play basketball with your best friend, seeing yourself as "gifted" is a real stretch.

Thirteen-year-old Gabe Carpenter is just like any other middle-school boy at St. Jude Academywell, except for the fact that based on his scores on some seventh grade test, he is considered a "genius" and is placed in an enrichment class with other gifted students. But he sure doesn't seem like a genius-after all, he can't even open his own locker and his brain stops functioning when Becca, his sister's best friend, comes around.

As if these problems aren't enough to deal with, he is convinced that one of his arms is longer than the other, he has yet to grow a mustache, and his second best friend is mad at him. Even worse, his nervousness causes some pretty embarrassing bodily functions. And at home, his dad expects him to be some kind of basketball star athlete instead of a science nerd who predicts the weather.

Join Gabe as he navigates the trying times of middle school, wonders what it means to have brains, and learns what it truly means to be himself.

Themes include: self-acceptance, giftedness, and humor.
Add to Wish List
Read a Sample
About this item
Format:
Paperback
Pages:
208
Dimensions(Inches):
5.25 x 7.75
About the author

Marilee Haynes lives with her husband and three young children just outside Charlotte, North Carolina. A full-time stay-at-home mom, she writes middle-grade fiction in stolen quiet moments (in other words, when everyone else is asleep). This is her first novel.

"a.k.a. Genius presents a cast of dynamic characters so genuine that any reader will find someone with whom they resonate. The struggles and triumphs of the book's middle school students and their parents are so real that you feel as if you know these very characters. Teens need books just like this; I am looking forward to more from Marilee Haynes."